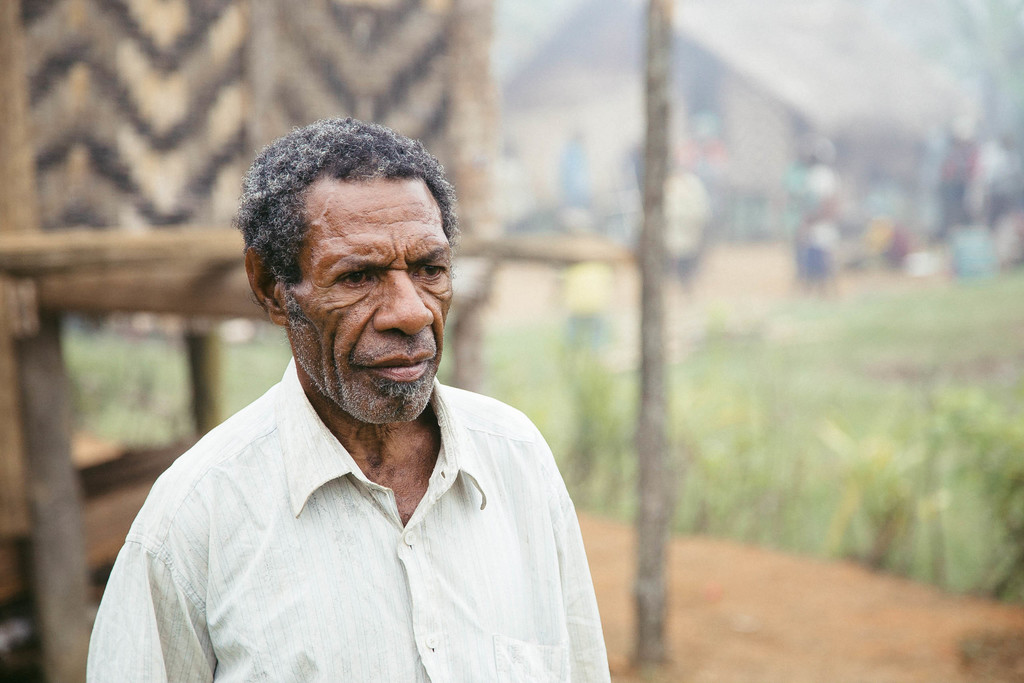 Decades after Gabriel boldly chose to trust God for protection from evil, he still sets a powerful example of trust and obedience among the Tay people.

Gabriel was the one who finally uprooted the magic plants. “You shouldn’t have done that! You will suffer consequences! The spirits will make you pay for defying them!” The village sorceress condemned his actions.

The spiritual oppression in Papua New Guinea is almost palpable, as thick as the island air. The spirits thrive, teeming in the jungle, inflicting pain, sickness, and destruction. The Tay people woke and slept and walked the jungle paths under the pressure of the presence of evil. They developed rituals to please and appease the spirits. And for uncounted generations, in hopes of warding off these hostile powers, the Tay have grown tanget plants in strategic places in their villages.

But the only Scriptures available to them were in Tok Pisin, a language most did not understand. So Gabriel translated Scripture texts orally into the Tay language as he taught. He did his best, but he knew that it was not enough. Aware of Pioneer Bible Translators’ work, the church leaders sent them a letter appealing for the gift of God’s Word. And the church began praying, “Oh, Lord, will You please send someone to translate Your Word for us?”

At the same time that the Tay church was praying, Steve and Rhonda Hayward were asking God to show them the people He desired them to serve in Papua New Guinea. God answered all these prayers by directing the Haywards to begin ministering among the Tay in February 1984.

“It has been a great joy for us to see first-hand the transformational power of God’s Word in the heart language of the Tay people,” Rhonda says. “God’s Spirit used the translated Word over the many years as it was finished—line by line—to transform lives.” A man publicly burned his collection of magic artifacts in bold testimony of his faith in God’s protection. A woman, convicted that she should no longer consult a sorcerer when her children became ill, asked to be taught what God’s Word instructed her to do instead. People from neighboring language groups commented that the Tay were becoming more peaceable. Little by little, transformation was occurring.

Gabriel’s wife Druk had an accident. She slipped and fell while climbing over a fence, and one of its wooden spikes impaled her. Without immediate care, she would die.

WHEN THE GOSPEL WAS PROCLAIMED among the Tay by visiting missionaries, many accepted the Good News. But an animistic view of the world—the awareness of being surrounded by spiritual forces that live in the environment and manifest themselves in many ways—permeates every aspect of life in Papua New Guinea. Even the Tay who became Christians still lived in fear of demonic forces and followed the spirit-appeasing practices woven into the very fabric of their daily lives.

Steve and Rhonda Hayward, missionaries with Pioneer Bible Translators, desired to see the lives of the Tay transformed through God’s Word in their language. They longed for the people to live in the freedom that was theirs in Christ. As they discussed the Scriptures, Steve and Rhonda gently addressed some of the culturally ingrained practices by which Tay Christians continued to worship other gods. They encouraged the people to pray about taking tangible steps forward in trusting God. Perhaps they could begin by uprooting their tanget plants.

The people were hesitant. What if God didn’t protect them? What if He couldn’t? They weren’t sure whether they could trust God to keep them safe.

Gabriel, the pastor of his village’s small church, finally took action. Standing near the tanget in the center of the village and facing the jungle full of spirits, Gabriel prayed aloud for the Lord’s protection. Then he reached down and began uprooting the plants.

With the warning of the sorceress echoing in their minds, the people waited to see what would happen. Would Gabriel suffer? Or would God protect him and his family? Who was stronger? It was a contest reminiscent of Elijah’s encounter with the prophets of Baal.

Then Gabriel’s wife Druk had an accident. She had been working in the mountain garden from which she fed her family. She had slipped and fallen while climbing over the fence that protected her crops from wild pigs, and one of the spiked wooden posts had impaled her. Gabriel found her with the post embedded several inches in her body. She was bleeding profusely. Without immediate care, she would die.

Gabriel frantically radioed Pioneer Bible Translators’ office in the town of Madang, since the Hayward family was far away on home assignment in the United States. Arrangements were made for a helicopter to evacuate Druk, but it would not be able to come until the next morning.

Was the sorceress right? Was this how the spirits had chosen to punish Gabriel? Would Gabriel’s God take care of His follower? 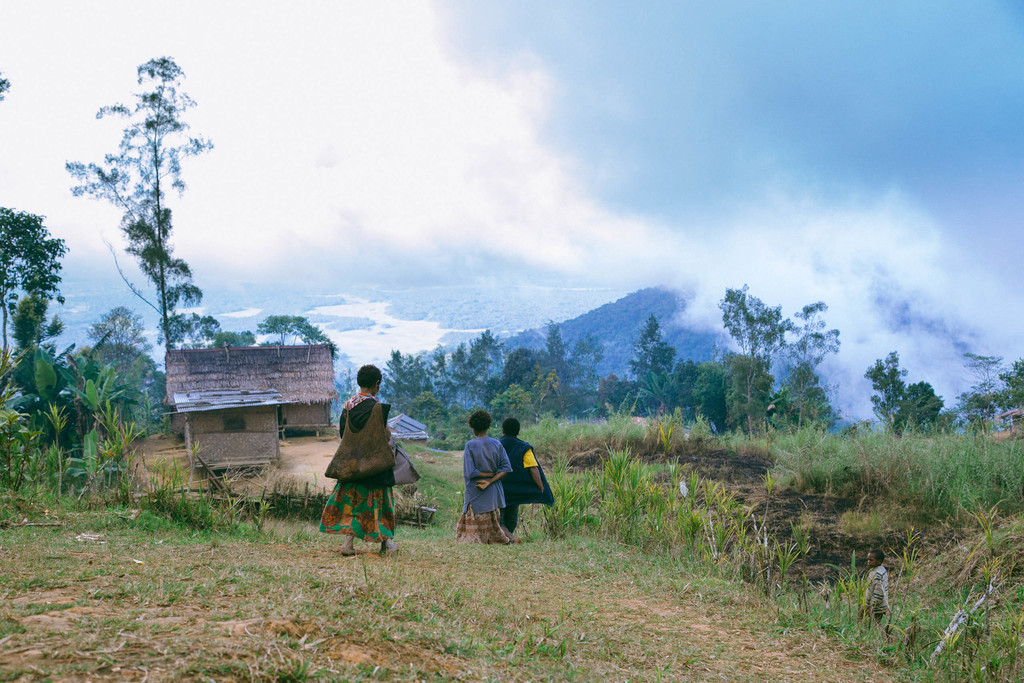 Fear of local spirits—and the power of that fear to enslave—are being broken as the Tay people learn to trust God for protection. Tay women like these can now move freely between their village homes and their jungle gardens, unafraid of spirits that once held them captive.

THE INCESSANT RINGING OF the telephone jarred Steve and Rhonda out of deep sleep. The voice coming through the handset informed them of Druk’s accident. As soon as they hung up the phone they began praying fervently. They also sent an SOS prayer request to the team of people they had developed to partner with them in prayer. These prayer partners, in turn, passed the request to others so that soon a host of people were praying for Druk. The Haywards knew this was not just an accident; rather, it was a spiritual attack on their dear friend. They also knew that the Tay people were watching and wondering. Was the sorceress right? Was this how the spirits had chosen to punish Gabriel for uprooting the tanget? And most significantly, would—could—Gabriel’s God take care of His follower?

Steve and Rhonda took seriously Jesus’ promise that the Father would give His people whatever they ask in His name (John 16:23). They understood that this means praying for what is close to the beating heart of our Savior. They cried out, asking God to demonstrate His power to the Tay people by healing Druk.

AGAINST ALL HUMAN ODDS Druk lived through the night. The next morning a helicopter arrived and transported her to a hospital. Gabriel took the stick that had impaled her, showing the doctor the blood stain that marked how deeply it had penetrated. While the doctor worked to clean and close Druk’s wound, the Haywards and their team of prayer partners continued to pray that God would spare her life and that through this, His power would become known among the Tay.

To confirm His intervention God not only saved Druk’s life, He also brought about a new one. While tending Druk’s wound, the doctor made a discovery: Druk was pregnant. Considering how deeply the stick had gone into her body and how much blood she had lost, it was unbelievable that she had not miscarried.

When Druk had recovered sufficiently, she and Gabriel returned to the village. They continued to hike into the jungle to work in their garden, walking in even greater confidence that they were under the protection of their God. And several months later Druk gave birth to a healthy full-term baby.

“YOU ARE ON THE FRONT lines,” the Haywards tell their prayer partners. “We come behind, gathering the fruit of your prayers.” They have repeatedly seen God’s power unleashed in their ministry as a result of those who go ahead of them in prayer.

Prayer is a tangible demonstration of dependence on the power of God. Human hands alone cannot bring healing or transform lives, but the hands of Christ can. Prayer is what moves those hands.