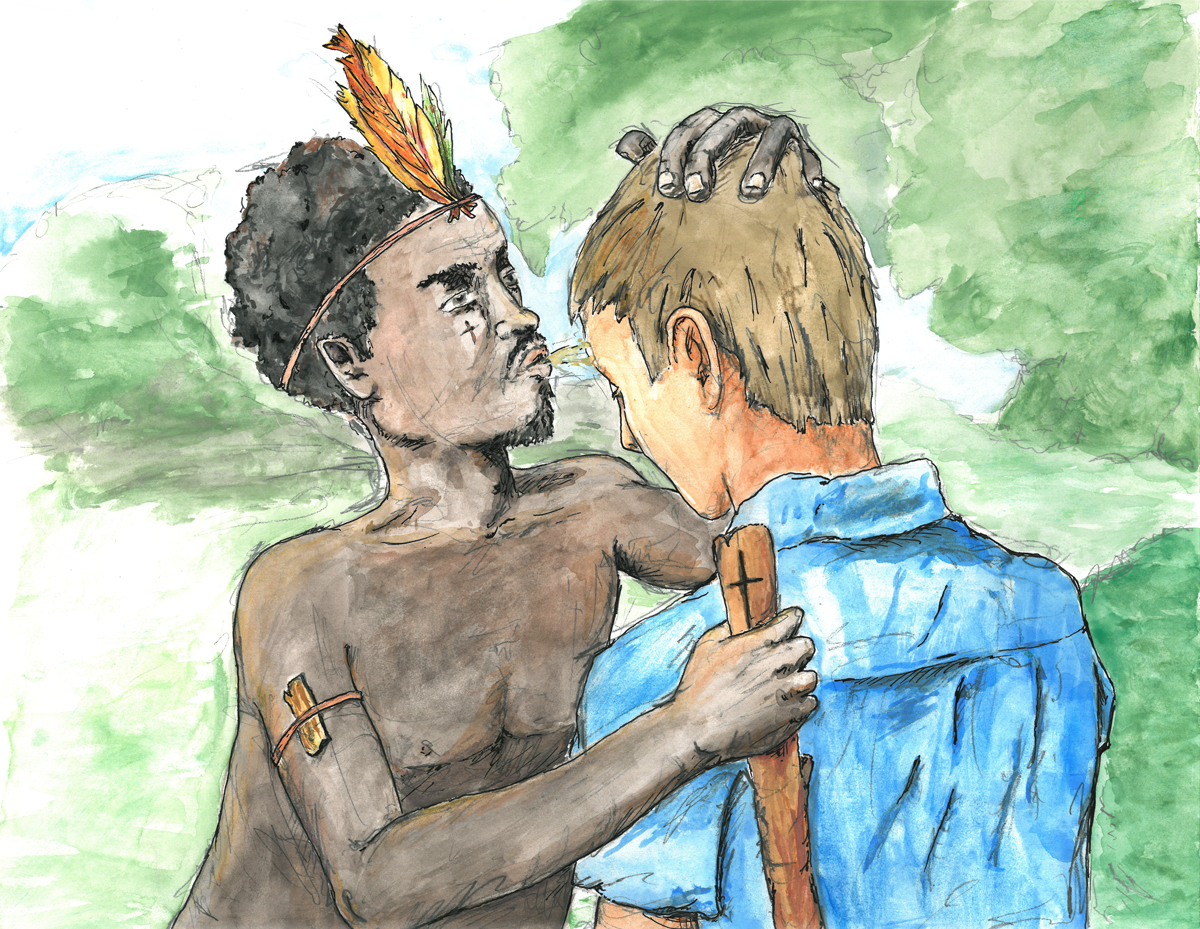 The witch doctor got to David first. He was surprisingly young, and his white tennis shoes contrasted starkly with the leather loin cloth around his waist and baboon-hide satchel slung across his chest. A spray of feathers was tied to his head and most appendages were adorned with leather thongs tied around small pieces of wood. Pulling my husband’s face close to his own, the kujur, with amazing precision, showered a thick spray of saliva and chewed ginger root across both cheeks and forehead. Then it was my turn.

When it was once again appropriate for us to continue on our way, our cultural guide and host informed us that we had just received a blessing. “He is welcoming you,” he happily assured us as we nodded and smiled while discreetly wiping ginger paste off our eyelids.

The reason for our warm welcome last week was a traditional ceremony we had been invited to attend in a remote village. We spent four days in the area watching and learning as hundreds of people took part in very old rituals and celebrations of their culture. It was a fascinating glimpse into a world that felt very far away from the ones in which we grew up.

From what we could tell, the occasion was a mix of celebration and grief as people danced and sang through the night and wailed and mourned for people who had died in the past year. It was beautiful and haunting and, above all, deeply spiritual.

Late into the evening, drums resounded to the rhythms of people reciting prayers from their holy book. Most songs the witch doctors sang involved hands or massive animal horns raised heavenward. Several goats were brought to the gathering and slaughtered. Every greeting included the words “Praise be to God” many times over. And there were blessings—many blessings—some of which involved ginger root and spit.

It was a bittersweet occasion for us. While we were amazed at the genuine spirituality of these people, we were burdened by the great fear that the absence of Jesus left in their lives.

In the midst of all of these frenzied traditions and rituals, one thing was particularly meaningful to us. Everywhere we looked we could not help but notice crosses. They were engraved in brass bracelets. They were chalked onto the shaved heads of grieving women. They were carved into wooden dancing sticks. And perhaps most notably, they were scarred deep into the cheeks and forearms of people everywhere.

The cross is meaningful to this community in ways we do not yet fully understand, denoting things like clan membership and status. It has been a part of who they are for hundreds, maybe thousands, of years. As we watched the singing, dancing, and crying from the shade of a baobab tree, we grew ever more excited about the future. Our hearts are stirred by a people hungry for God who already find identity in the cross. Our prayer is that the day will soon come when the meaning of this symbol that they have borne for so long will be revealed to them. It is Jesus and His cross that we long for these people to know.